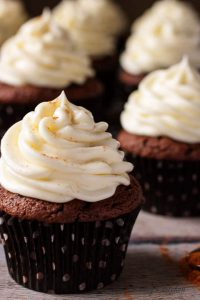 Kim and I talk, a lot. In fact, we spend hours at a time sitting next to each other on our sectional sofa just chatting. Usually, the topics surround our daily experiences or our plans for the future. It’s nice when you have someone to share your aspirations and desires with on a daily basis. During one such conversation, we were trying to come up with a new recipe for Alli. As always, I wanted dessert, but I wanted something unique. These lightly spiced double chocolate cupcakes were the result of that discussion.

We had just come back from traveling and were exhausted from the road. During the trip, we devoured tons of Mexican food. Kim typically goes after chile rellenos and rice; while, I prefer enchiladas and refried beans.  However, there is one thing we share a love for, and that is peppers! From ancho chilis to jalapenos and beyond, we adore peppers. So, it seemed like an obvious idea to try and add them to a dessert. Thus, the spicy double chocolate cupcakes were born. 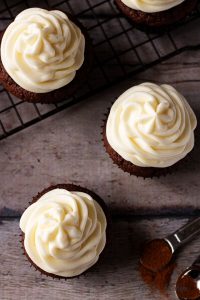 For this venture, Kim did the baking, and I made the frosting. I must say, she is remarkable at baked treats. She used a Devil’s Food Cake dry mix but then added chocolate pudding and sour cream. It was a menage a trois made in heaven. The pudding kept the double chocolate cupcakes moist, while the sour cream provided a hint of tartness behind the chocolate cake. For the spice, she chose ground cayenne peppers. All I can say is wow, she really brought the heat. A little word of warning, these cupcakes have a kick. Fortunately, my buttercream frosting is perfect for keeping the peppers in line. 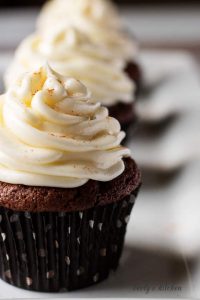 I guess you could say these double chocolate cupcakes are a chocolate triple play because I used melted white chocolate to flavor the frosting. Now, when adding melted chocolate to a buttercream base, things can get tricky. Once the cupcakes are stored in the fridge, the frosting can get pretty firm. To combat this texture annoyance, I mixed some heavy cream into the melting white chocolate. It was a risk, but it paid off. The frosting turned out smooth and creamy, even after being refrigerated for hours.  I guess the extra fat from the cream helped out? I am not sure, so someone with more culinary experience will have to confirm or explain what I did to keep the texture soft.

Just one final note before I give you the recipe. As you may or may not know, at Berly’s Kitchen, we try to focus on simplicity. Partly, due to chronic illness but, also to show you don’t have to be an expert in the kitchen to cook delicious food. Will the food always look the same? No, because there is a lot more to food blogging than cooking a dish and taking a picture. With that being said, don’t let differences in presentation discourage you. All that matters is that YOU prepared something tasty for yourself and the ones you love. As always, I wish you love everlasting, a long healthy life, and a belly full of spicy treats! 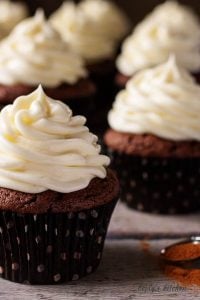 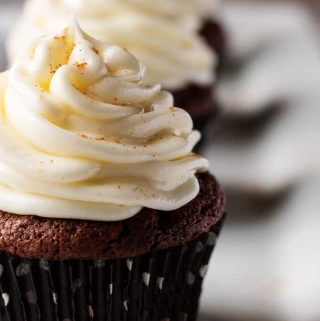 The calories listed are an approximation based on the listed ingredients. Actual calories may vary based on your ingredients. Cook and prep times include melting the chocolate and letting the cupcakes cool before applying the frosting. This recipe makes 20 cupcakes and they can be stored in your fridge for up to three days.