Delight in Fall flavors with this tasty Spice Cake with Cinnamon Cream Cheese and Pumpkin Buttercream that will make your taste buds go wild! 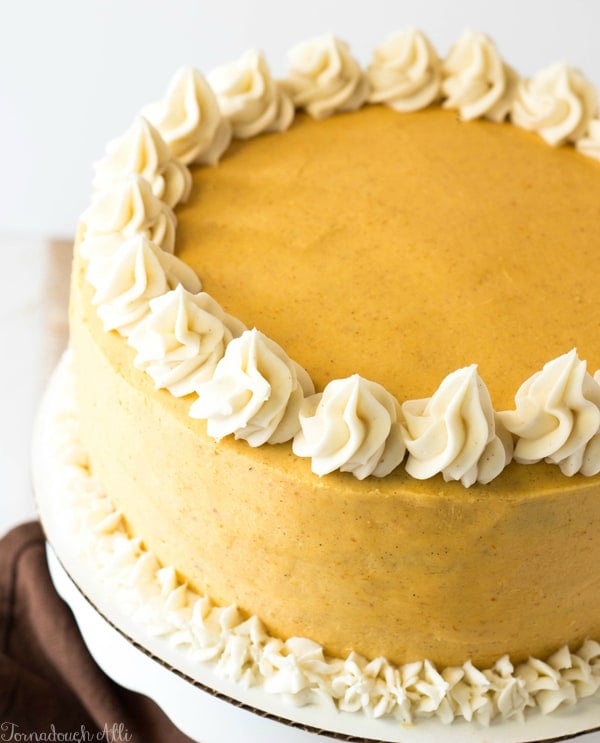 It’s that time of year again folks!! PUMPKIN time! I probably could have waited a bit longer to roll out the pumpkin recipes, but with the crispness starting to hit the air I just could not hold myself back. I mean if I had my way, it would be pumpkin all year long. 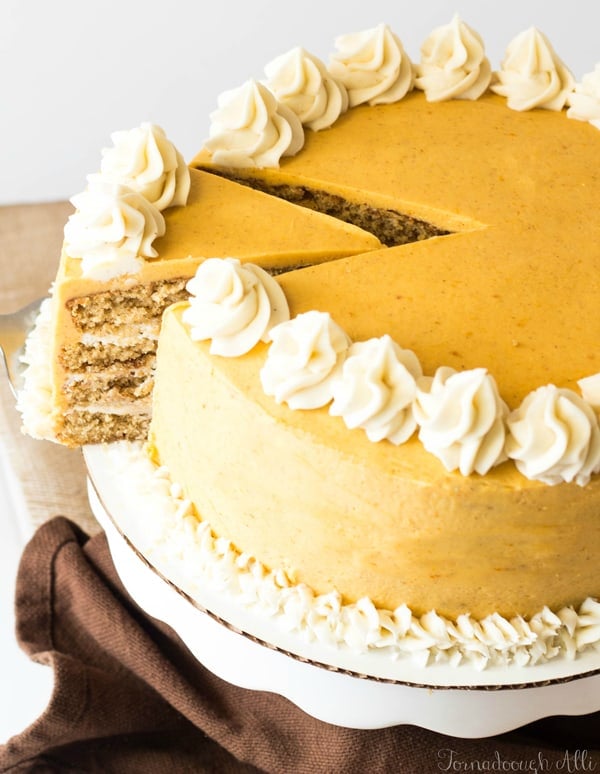 Besides pumpkin being one of my favorite Fall flavors I also adore spice! Well I figured I’d combine the two and make this epically amazing Spice Cake with Cinnamon Cream Cheese and Pumpkin Buttercream. I know, mouth-watering right? Pumpkin and spice were meant to be together.

So speaking of Fall approaching…what is your favorite things about this time of year? To be honest, there is something about the smell for me. I don’t know if it’s the leave falling, the smell of the air, the way the sun shines that just seriously brings back some amazing childhood memories.

If it was just a little bit warmer in the Fall (I am always freezing, apparently my body doesn’t like to circulate) then it would be deemed my favorite season. But alas, Summer will always remain in that top spot. I can’t wait to bust of the hoodies, boots and jeans. Country girl apparel I tell ya! 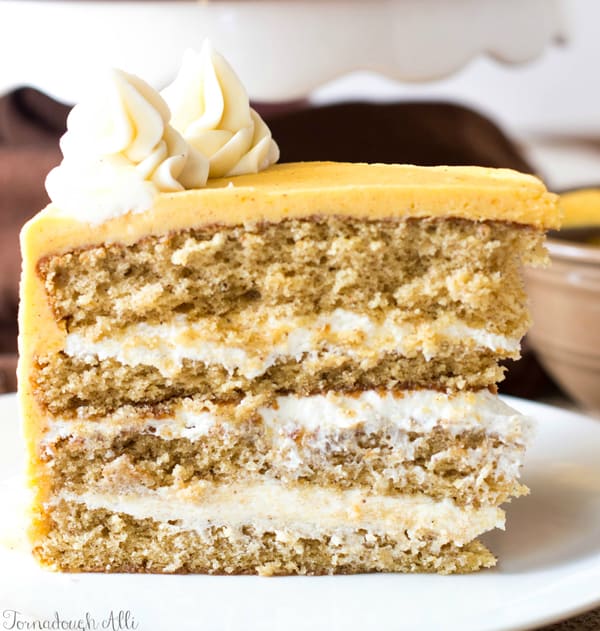 Anyways, let’s get back to this delicious cake. So you have a moist spice cake baked up until its golden. I knew I wanted to incorporate the cinnamon cream cheese in there because…duh, spice and cream cheese also pair nicely! So I decided that it would make an awesome filling.

Then I went all out and wanted to be a little different. Usually I combine my pumpkin into the cake mix to get the pumpkin spice flavor but with this version I decided I wanted to try pumpkin out as a buttercream frosting instead. OMG its heaven! Like seriously, heaven! 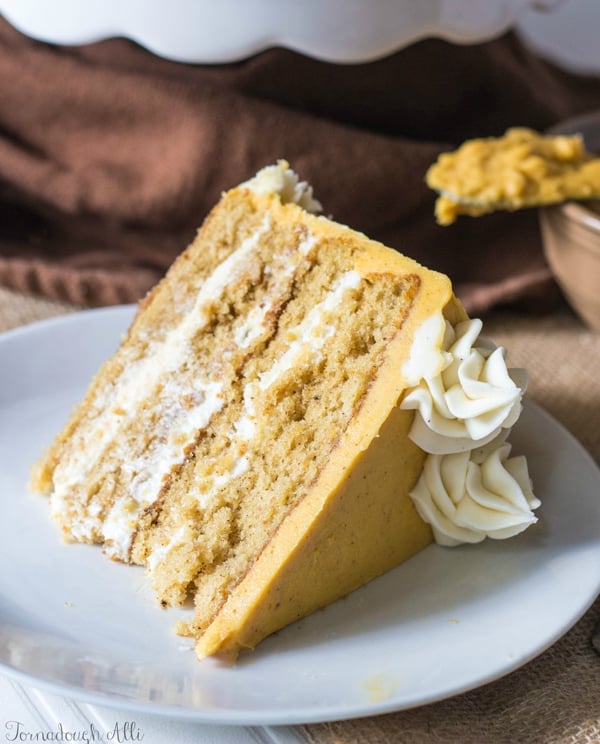 Oh, another great thing I love about Fall is that DQ and Culver’s rolls out there Pumpkin Pie ice cream flavors. I kid you not this buttercream is like you’re eating one of those creamy treats…minus the ice cream. I could eat this frosting with a spoon all day long if I felt that was acceptable, but my body would probably hate me for it, but at least I’d have a smile on my face while doing it. 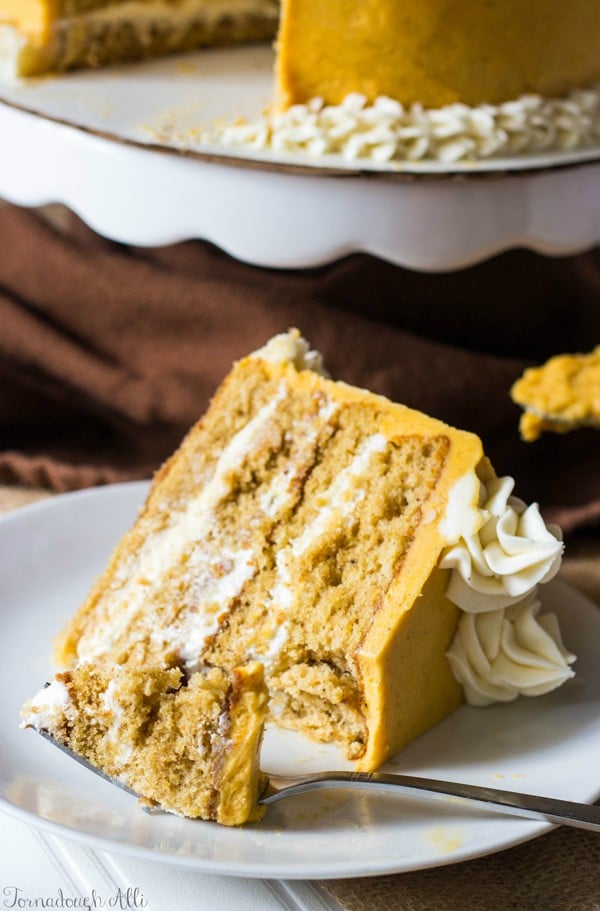 So if you wanna get a little crazy, like the good kind of crazy. If you love cake (who doesn’t). And you just want a delicious cake to celebrate the season this Spice Cake with Cinnamon Cream Cheese and Pumpkin Buttercream is the way you need to go!

So I URGE you, go by yourself the first can of pumpkin you see…took me two tries on that one because unfortunately the first store I went to had ZERO cans…either someone was just as eager as me to start with all the pumpkin flavors orrrrr they didn’t start regularly stocking them, in that case…such a shame! 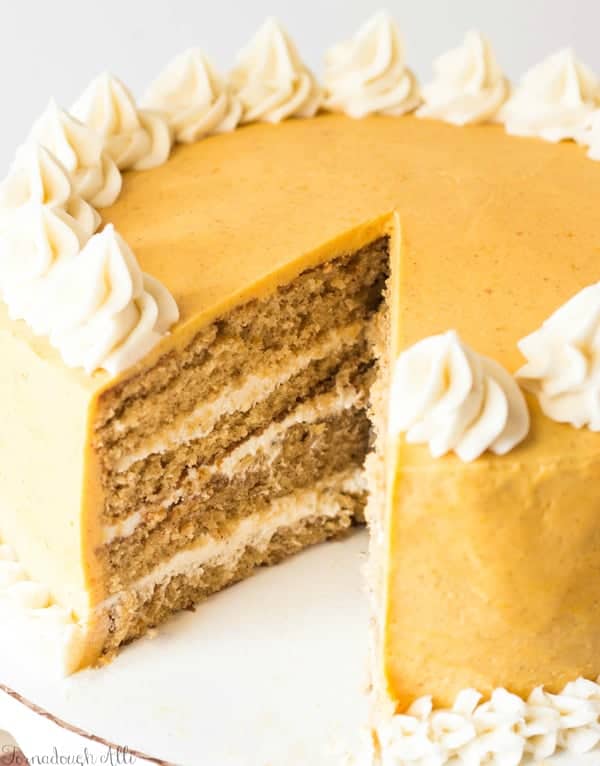 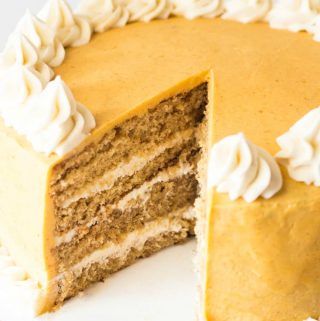